For those of you who are interested, the watchmen Ultimate cut has been released which brings together the Tales from the black freighter with the Directors cut of Watchmen. I just sat down and listened to the audio commentary of Zac Snyder while watching this and I have to say, this is THE definitive version of the film. I recommend this to anyone who is a fan of Watchmen.
Posted by demeterpictures at 11:21 PM No comments: 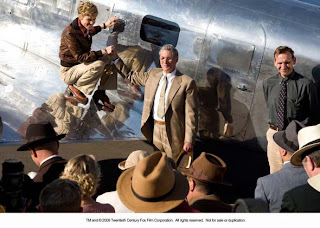 So a little over a year ago I was on set during the filming of the movie Amelia which opened this weekend. In the movie I had a small part which was cut down to an even smaller role in the film I just saw. However I am indeed in the movie and I am even sporting my Indiana Jones fedora. I make two appearances but you have to know where to look. During the carnival festival when Amelia wins a race and is accepting the award I am over her right shoulder, spotting my fedora. I will be sure to get the Blu-ray of this movie and take some snap-shots

It was a good thing I was wearing that hat because it made it easy to spot me.
Posted by demeterpictures at 12:12 PM 1 comment:

DVD Vs Blu-ray: The Facts

Anyone who knows me knows that I am a tech junkie. I am always looking for the next best thing. I remember being a freshman in university writing about VHS vs. DVD. Whoever won that battle I cannot say but DVD has certainly won the war hands down. VHS should only be used now as a sentimental thing. One of the most enjoyable experiences I have ever had was making my very first DVD way back in 2002. It seems like such a long time ago. It was Fell Endgame and I was ecstatic.

Now Blu-Ray is making the rounds and I know some people are asking: Is it worth the jump? Its not like going from analog to digital or the removal of having to rewind your tapes or them aging on you after repeating viewing. Those days are long gone. When most people hear that Blu Ray can support 1080p full high definition video they might say “So what”? I mean is shelling out more money for a new system really worth it. What does Blu Ray have to offer that DVD does not? Well just take a look at the current specs of a new Blu Ray I just made. Keep in mind now it’s all on one disc:

And I still had space left over. That’s one thing Blu Ray has over DVD. It’s the space and yes the great picture quality. That’s if you shot your video on High definition. For me all those videos were shot with digital cameras or even the old VHS camcorders and some were even edited on analog systems. Anyone remember those?

That’s why I made the jump to Blu-ray. It’s the space and the archiving of data. However what bothers me is the fact that HVD, a technology vastly superior to blu-ray, is already made and ready to be released. That’s in 5 years though. Holographic Versatile discs can hold up to 3.5 Terabytes of data. Ill let you do a Google search on how much space that is.

If the private companies who manufacture this technology were to release the HVDs it would be great. Not only would we be able to finally own full working prints of 35 millimetre films in their 3000x5000 pixels per square inch (that beats 1080p doesn’t it?) original form in digital format but the archiving of material would be easier and more efficient. The only down side is that the computing power would have to triple in the next 5 years to match this. I don’t see this being a problem with the way computers are going these days.

My whole argument is that the Blu Ray, as nice as it is, as nice as the HD picture is and the space for video and film is quadruple that of DVD, it just wasn’t necessary. We could have skipped the High-definition craze and went straight into full working digitized prints. No more scaling down of video and film for the masses. Hell they could even release working prints of IMAX movies on a HVD, can you imagine the picture quality of that?! You think a 1080p HD picture is good, that’s nothing to what would be a full working IMAX print on a HVD. The resolution of that video would be at least 8 times that of 1080p.

What I am talking about may seem like science fiction but it isn’t. HVDs are very real and are ready to go. In fact there is even a HVD player already available to purchase by the average consumer right here: http://www.global-b2b-network.com/b2b/93/94/503/page23/337327/hvd_player.html

It will just set you back about 15,000$ and you won’t be able to play any HVD movies for at least 5 years. HVD technology is so impressive you could fit an entire years worth of DVD video on a single disc and half a year’s worth of straight HD video on one disc.

Blu ray is great, I have a blu ray writer and I make blu rays but I am well aware this wasn’t needed. It was not as big a leap from DVD as DVD was from VHS. To the average consumer I recommend hold onto your money and save it for HVD. That’s when things will get really interesting...
Posted by demeterpictures at 9:40 PM No comments:

I was one of the lucky few to catch a early screening of the highly anticipated Watchmen movie arriving in theaters on March 6, 2009. I was not familiar at all with the graphic novel or the characters until I saw a trailer for it during The Dark Knight (superb movie).

It was really until my brother told me to read the graphic novel that I decided to give it a glance, expecting it to be like spider-man or the other 30 super hero comics turned into movies. Of course I was not expecting much and if you don't want to know anything about the movie or novel. Stop reading NOW!

Now onto the review. Watchmen is set in an alternate 1985 reality in which super heroes walk among us. Due to the fact that Dr. Manhattan (a man endowed with god like powers) ended Vietnam in a few days means Richard Nixon is still in office. However the threat of nuclear annihilation from the Russians is still quite real.

Ill cut to the chase if you like novel then you should enjoy the movie. Its really as good as its going to get and its as faithful as it can be. What made the story stand out for me was the strong theme of morality that was played in the novel. For instance Rorschach (a fan favorite) is deemed a psychopath by everyone around him, yet in the end he is the only one who makes the right choice.

It is a story about heroes and it raises the question what is good and what is evil. If the world could be saved with a lie would be it ok? If you could kill millions to save billions would it be morally sound? It is a story about those who think of themselves as the heroes yet in turn, turn out to be the problem themselves. A theme I have seen personally in my life. Those who love the world too much or love some one too strong can end up hurting what it is they love. Those who do evil often think of themselves as the hero inflicting some kind of justice on someone or something.

Dr. Manhattan is a being who can do anything yet his problem is he cares too little and Rorschach cares to much. This for me was the strongest point in the novel and I am glad they have it in the movie. I don't know how people who have not read the novel will react when they see the movie but they should at least enjoy the amazing visuals. It is not nearly as bad as some critics are panning it out to be.

Jamie Demeter
Posted by demeterpictures at 2:36 PM No comments: